I fell off my bike.

From my crazyguyonabike journal [link]:

I was climbing Haddon Hill on NS 3 and had gained on a challenging grade a little over half of its 180 foot elevation. There was no shoulder and the edge of the pavement under the white road edge line was rutted and crumbling. It was not the worst condition I had encountered on the ride to this point but it was pretty bad. At M119.3 a perfect storm came up consisting of a poorly-timed shift, a wobble and a rut in the road. Without warning the bike went out from under me and (as I learned from a driver right behind me who stopped to offer assistance) I flipped over the right side of the handlebars and into a yard/meter deep drainage ditch filled with weeds on the roadside. My right shoe came off as I was in the air and landed past the ditch a couple of yards/meters from where I landed. I came down on my helmet and right shoulder and I was pretty badly stunned as it took a few minutes to reorient Myself.

My head rang, my neck stung and my shoulder hurt, but I was not bleeding or even badly scraped anywhere. It could have been far worse. The aforementioned driver told me afterwards that he was afraid that I would be grievously injured or even dead when he reached me. Several other vehicles stopped and I was literally overwhelmed by people who wanted to help. Just as amazing as my coming through the crash more or less unscathed was that neither the bike nor the gear suffered any damage. There were some scratches on the Ortlieb panniers on the right side, but they are quite apparently made of pretty tough stuff. Several people who stopped urged me to go to the local medical clinic- apparently the one I had just departed where I had weighed myself- and one good-hearted fellow offered to drive me back into Halifax to a hospital. I’m afraid I disappointed everyone in the end, as I begged off all the kind offers of help, telling everyone I just needed to sit and rest for a while and then assess how I felt. The first driver to stop walked my bike for me about 75 feet/23 meters up the road where I sat down on a rock wall for about 45 minutes.

And then I climbed back on the bike and started back on my way to Key West.

I was, mind you, still hurting. My head ached and my neck and right shoulder were pretty sore. But looking back as I write this journal entry over the space of almost six months I think I made the right decision by continuing on. If I had gone to a clinic or an ER I probably would have been told how lucky I was and told to rest for several days. This almost certainly would have been sound advice, but I would have suffered a major break in the momentum of my ride so early on. Who knows what the ultimate impact of such a break would have been? I think, again in the light of 20/20 hindsight, that I needed to feel at that point that I was going to make it all the way to Key West despite such obstacles as the road might throw at me. So I pedaled on.

Hopefully the ride this year will go without any such incident,

On August 21st of last year I was on the third day of my Atlantic coast ride, cycling around Nova Scotia’s incredibly beautiful Aspotogan Peninsula.  My crazyguyonabike journal entry for the day is here [link].

I was spending the first night on the road of my 3,600 mile/5,800 kilometer solo bike ride down the Atlantic coast from Halifax, Nova Scotia to Key West, Florida.

That ride took 84 days.  Gary Schmidt and I will ride this year about two-thirds of that distance in just over half the number of days.  Of course, I spent the first full six weeks of the 2016 trip in full tourist mode, averaging only about 30 miles/50 kilometers a day. 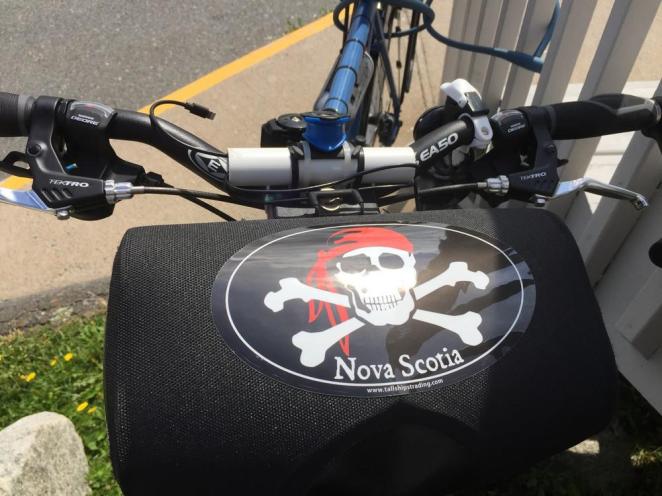 You can read my partially completed journal of that ride (through the ferry across the Bay of Fundy at this point) at crazyguyonabike.com here [link].  I plan to write the journal of this year’s ride as I go along, so I promise I won’t get so far behind.