I figured up the remaining mileage tonight from atop my picnic table sleeping platform at the Ocracoke National Park Service campground.  I’m 500 miles/800 kilometers south of New York City and about 2,400 miles/3,850 km from my start point in Halifax, Nova Scotia.  Mathematically, that means two-thirds of the trip’s mileage is behind me. 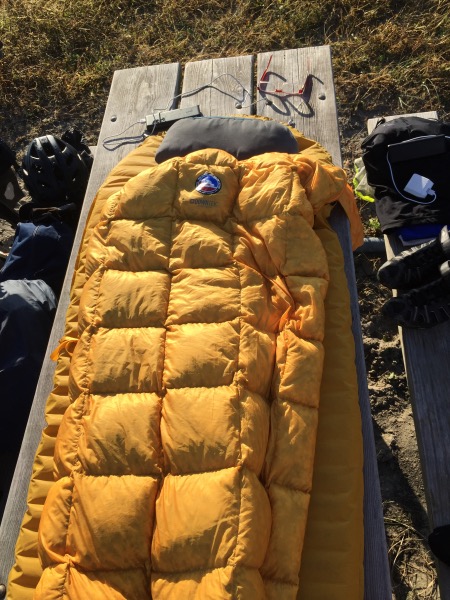 I’ve been riding for 61 days- just short of nine weeks- and have thus averaged just under 40 miles/65 km a day.  I plan to arrive in Key West on November 10th, so that leaves 23 days to go.  I’ll need to average a little over 50 miles every remaining day in order to make it.  That’s probably a little less daunting than it looks, though, as pretty much all the trip’s elevation gain- something over 90,000 feet/27,450 meters- is in my rear view mirror.  The tallest hills left on this trip are various coastal bridges. The rest of the ride will average somewhere around 10 feet/three meters above sea level.

After tomorrow’s 20 or so mile/32 km ride from Ocracoke village to Cedar Island, only one short ferry crossing will remain- over the Cape Fear River just south of Wilmington, North Carolina. These ferry rides have been welcome breaks along the way, and I count each of them among the high points of the places I’ve traveled.  They’ve added a whole further connection to the Atlantic Coast for me, and I can not envision this trip without having made them.

Three states remain to be crossed after I leave North Carolina in a couple of days: South Caroline, Georgia and the length of Florida including heading far out into the Gulf of Mexico on the Ocean Highway across the Florida Keys.  Even though the time left- just over three weeks- seems relatively short in light of the months I’ve been on the road already, it is clearly no afterthought or mere winding up.  It remains an epic ride all in itself, and I’m looking forward to accomplishing it.