Another bucket list item my couple of days in the Washington, D.C. area has allowed me to check off is to ride the Mount Vernon Trail bicycle path that parallels the George Washington Parkway out to- where else?- Mount Vernon. Having seen the only place where you can be certain a “George Washington slept here” sign is factually accurate- Fun Fact: George Washington never slept in the White House, as it was not completed until after his death– when I lived in Virginia in the 1980s, I didn’t need to see the residence or any of the outbuildings again. The bike trail was it for me.

The Surly appeared to be in good order- I figured that a little more than 40 mile/65 kilometer round trip would probably shake anything loose that hadn’t already turned up. So, armed with a Ride with GPS route loaded on my phone, I rode down the hill to the start of the trail at the end of the south approach to the Key Bridge. This part was easy- I had done it before on my evening ride into downtown D.C. the day before.

The Mt. Vernon Trail just south of this point wound through the grassy lawn of the Potomac riverfront directly across from the Lincoln Memorial and National Mall.

It is extraordinarily busy with cyclists, skaters, folks on scooters, pedestrians, people with baby strollers, you name it. Unfortunately this does not make for a really good mix of traffic. Riders on speedy bikes really didn’t have enough room to move along without endangering others- they should slow down in this crowded area. Groups of pedestrians were also a problem, as they frequently stretched all the way across the trail and often seemed oblivious to bike riders overtaking from the rear. In my opinion multi-use just doesn’t work here and a parallel pedestrian-only path is badly needed, probably down to National Airport.

Another issue was the narrowness of the trail under the Arlington Memorial Bridge, which carries traffic rounding the Lincoln Memorial across the Potomac into Virginia. This is a very wide bridge and the trail underneath it is on a narrow ledge between the eastern abutment and the almost insanely busy high-speed northbound traffic lane of the George Washington Parkway. It is barely wide enough for a single bicycle and I don’t believe that two bicycles moving in opposite directions can safely pass unless one of the riders dismounts, moves him or herself and the bike he or she is riding as far over as possible and stops while the other rider passes. The problem is compounded by the aforementioned high-speed cyclists. There is poor sight distance approaching the underpass on the trail, particularly from the north end. I observed two fast riders have to make panic stops in a very constrained place immediately after entering the underpass when they encountered a rider approaching from the other direction. This is not simply an inconvenient situation- it is a really dangerous one and needs to be addressed, probably by creating a separate trail underpass under the bridge approach.

Anyway, just past the Memorial Bridge the trail passes an interesting monument to the Navy and Marines that drivers on the parkway probably fly past without noticing.

South of here I reached the 14th Street bridge complex carrying Interstate 395 and U.S. Highway 1 across the Potomac, along with an old iron truss railroad bridge and the bridge carrying the D.C. Metro line into the Alexandria area. The trail crosses under these bridges at the river’s edge and is otherwise not impacted by them.

The next several miles/kilometers of the Mt. Vernon Trail run between the George Washington Parkway and the Ronald Reagan Washington National Airport. A nice set of bridges keep the trail separated from the traffic entering and exiting the airport and it is much less heavily used here, so riding became much more pleasant. At the south boundary of Reagan National the Four Mile Run Trail bore off to the west. This paved multi-use trail connects with the WO&DT rail-trail and, by continuing on to the Custis Trail, offered me an alternative, albeit a few miles/kilometers longer, route back to Rosslyn on the way back from Mount Vernon. That’s an offer, as it turns out, that I didn’t accept, but it was nice to know that I had options. 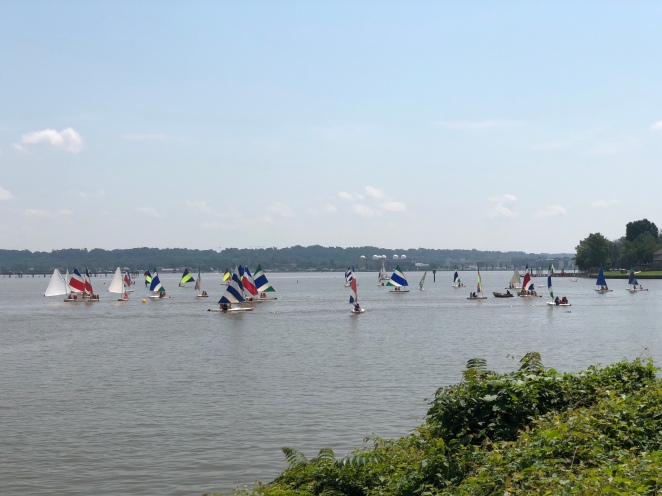 The George Washington Parkway and the Mt. Vernon Trail are both interrupted south of the airport by downtown Alexandria, which meant for me a several mile/kilometer stop-and-go ride on city streets.

The trail is not as clearly marked as it could be- a lot of the signs just say “Bike Route” and just leave it at that. Ride with GPS and a little bit of guessing got me through here just fine, but a rider who is just expecting to follow signs marking the Mt. Vernon Trail is probably going to get frustrated. On the other hand it is Old Town Alexandria and, if you have to be frustrated somewhere, here is as nice a place as any. 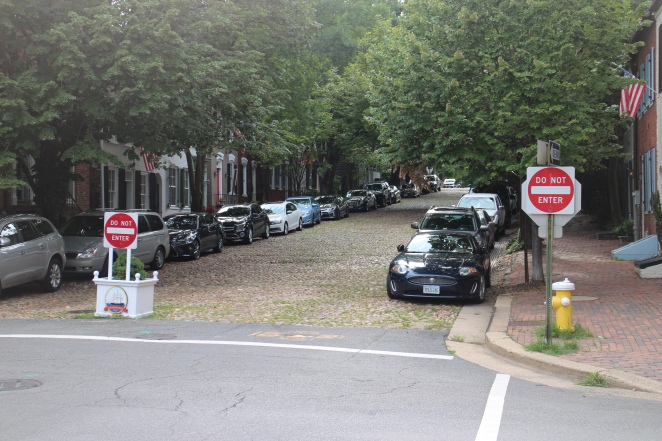 Speaking of sparse signage, as I entered Alexandria I spotted an East Coast Greenway sign.

Even worse, there was a a little plaque on a post in a pocket park adjacent to the trail.

I have ranted about the ECG at length elsewhere, so I’ll just give you the shortened version here.

In the fall of 2016 I bicycled the 3,600 miles/5,760 kilometers from Halifax, Nova Scotia to Key West, Florida and posted about doing that early on in this blog. A friend sent me a link she was all excited about sent me a link to this thousands of mile long bike trail that was going to run down the coast and was approaching completion by leaps and bounds.

I read the article and it sounded pretty good. Hundreds of miles of trail in place! Hundreds more of trail in development! But the map put me off a bit. The routing was really weird. Hardly ever near the Atlantic Coast once the Greenway was north of South Carolina. All sorts of strange and needlessly complicated routing near cities. Way inland in some places. And, worst of all, most of it was on the shoulders and sides of roads and streets that just happened to be in the designated corridor. The whole thing, after I’d thought about it for a while, seemed to lack coherence- any sort of central organizing tendency, except that it runs through states that are on the Atlantic Ocean.

As I road south from Maine I discovered the real issue with the Greenway. Like the “Soylent Green is people” moment in the movie of the same name, I came to realize that the East Coast Greenway is just signs. Well, not quite. Just signs and hype.

And not many signs at that. The ECG sign budget must be about $69.95 a year. I was on about 20 miles of the Greenway today and I saw two ECG signs- one each way. Two years ago I rode on probably 1,000 miles/1,600 kilometers of the Greenway route. There were days that I went without seeing a single sign. In the parlance of transportation planning the vast majority of the signs that I did see would not be termed directional signs, either. They are what are called reassurance signs- route markers posted every so often to reassure the traveler that she or he is on the correct route. On public roads you’ll find reassurance Interstate, federal and state highway route shields every few miles. 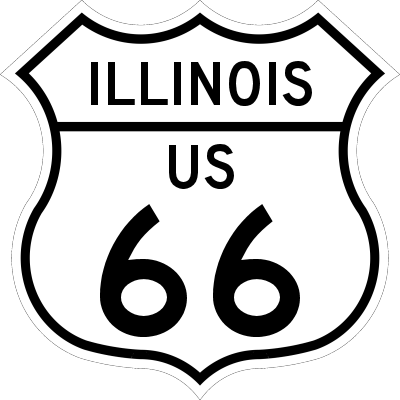 A bicycle route is no different, especially when it changes with some frequency from road shoulder to dedicated bike lane to separated path to rail-trail and back. Let’s say bikes, on average, are five times slower than vehicular traffic on a road. If highway reassurance signs are every five miles/eight kilometers apart then bike route signs should be a mile/every 1.6 kilometers apart in order to see them with the same frequency. For the ECG’s “3,000 mile” length, that’s about 6,000 reassurance signs- 3,000 in each direction. I didn’t see 300 Greenway signs two years ago, and the ones I did see appeared to be simply placed at random. Today, as noted, I saw two in about 40 miles. And, as noted, this doesn’t even count directional signs, which should be posted at virtually every point where the route undergoes some change: a turn, a route diverging onto a separated bike path, those sorts of things. So, enough about that.

The East Coast Greenway- Just a few signs. And a whole lot of hype.

Weren’t we talking about something else! Oh, yeah… the Mt. Vernon Trail. Well, my route through Old Town Alexandria took me through an old railroad spur line tunnel 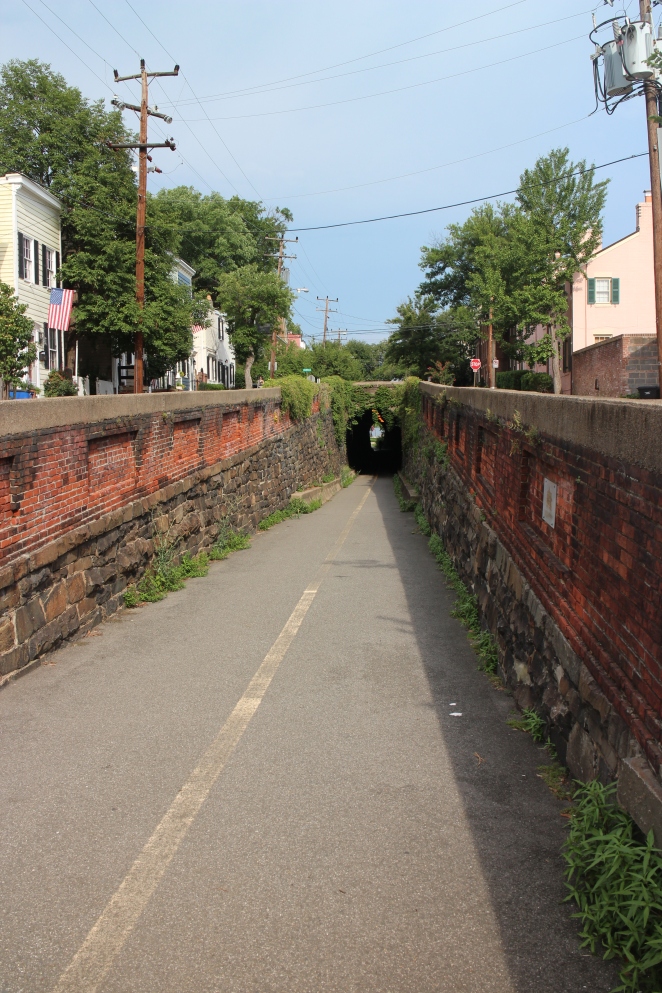 as the trail neared the I-495 Beltway, which crosses the Potomac on the Woodrow Wilson Bridge, which was completely rebuilt about ten years ago. After crossing under the gigantic bridge, which looked like it had been washed that morning

the Mt. Vernon Trail headed up a ramp alongside the interstate to rejoin the George Washington Parkway again, which reverts back to an access-controlled sometimes divided road as it leaves Alexandria to the south.

At this point I had come just about halfway to Mount Vernon, with just under ten miles/16 kilometers left to go. I was getting pretty hot and thirsty, but a Google Maps search of the trail route through Alexandria and just to the south had revealed no fast food restaurants on it- nothing other than foo-foo little cafes with cute names where a glass of water would probably set you back four bucks, ice extra, plus gratuity.

So I had to cross the Parkway and go off-route about a quarter mile to a Roy Rogers restaurant, where fountain drinks with free refills flowed with all the ice you could use for about half that. Refreshed, I headed back to the Mt. Vernon Trail and ride the rest of the way out to my destination. The trail was a delightful ride through woods and marshes, sometimes crossing wood-plank bridges that frequently bent around trees or curved up the side of a ravine.

The Potomac was not in view until a few miles/kilometers right before the very end, but when it showed up, it really looked nice. 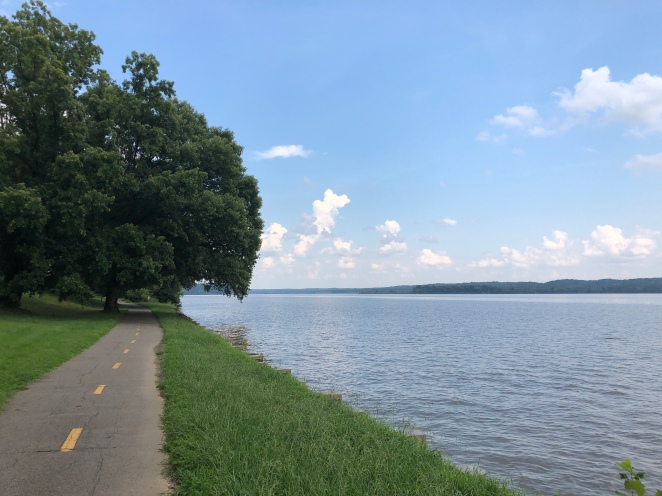 Right before the end of the trail there were a couple of actual hills. Nothing to write home about, mind you, but just big enough to give you a little glow of accomplishment to go with the sunburn from the ride.

I took a break for about 45 minutes at the gate to make sure I was hydrated and relaxed, then stopped for the obligatory bikie 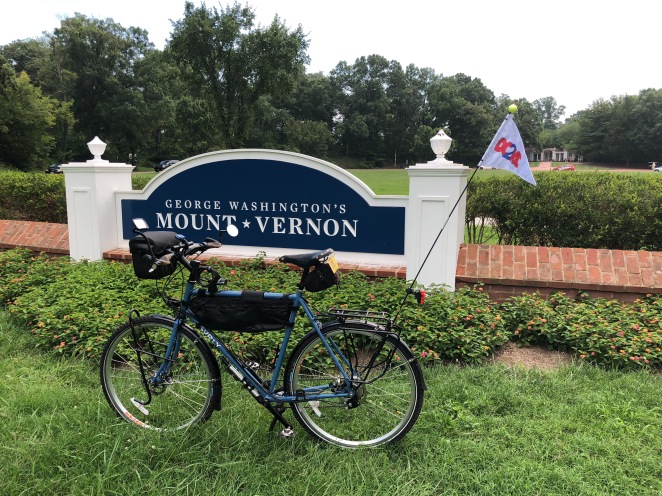 and headed back up the Mt. Vernon Trail the same way I’d come, seeing all the things I’ve just described to you in reverse order.

All in all a very satisfying afternoon’s ride. Highly recommended if you’re in the area.