My last day on the Towpath started about as poorly as any day on a bike trip I’ve had over the past two years. That’s actually saying quite a lot– I just added up the days that I’ve been on trips over that period of time and it comes out right at half a year: just over 180 on the road. The day ended yesterday with me pulling into Stickpile Hill Hiker/Biker Campground just before five in the afternoon. There had been no rain in the forecast that morning, so I wasn’t really expecting any. I went through my evening routine of pulling out the sleeping bag and Thermarest air mattress, and unrolling the bag to let it fluff up on top of a picnic table while I inflated the Thermarest. I didn’t even have my tent out of the pannier yet.

I had about five good lungfulls of air into the Thermarest out of the 25 or so that it takes to inflate it. In that instance it started to rain as hard as I think I’ve ever seen it rain. In a couple of seconds I was drenched. The sleeping bag was drenched. If anything, it started raining harder.I was under a couple of trees but they weren’t making any difference. The only cover at the hiker/biker site was under the picnic table on the muddy ground and in the Porta-Can. No thank you to either.

So I sucked it up, methodically got out the tent, and set it up as quickly as I could, fly and all. Tent up, I tossed the sleeping bag and the Thermarest into it and then went over to the bike and buttoned it up as well as possible. I then went back to the tent and climbed inside. It is very accurate to say at that point I was not a happy camper.

Fast forward to this morning. You can imagine what my night was like. I have a Big Agnes Pitchpine down bag and the down did as well as it could under the circumstances, which wasn’t a whole lot. At least it remained reasonably warm overnight, so I didn’t need to worry about adding hypothermia to the effects of not getting any sleep after a mildly strenuous day pedaling a bicycle. I was up before the sun, not wanting to spend another minute inside a sodden sleeping bag. I got everything packed up as quickly as I could and was back on the towpath before 7:00 a.m. “At least,” I thought, “I’m going to ride through Paw Paw Tunnel in just a little bit.”

I rode by some deer- the only ones I managed to get a picture of despite seeing the every day I was on the Towpath.

I rode under the abandoned Western Maryland tracks, which I understand the Park Service has blocked the state of Maryland from converting to a rail-trail across this area because… bats in old railroad tunnels. Sheesh!

There were some nice locks. 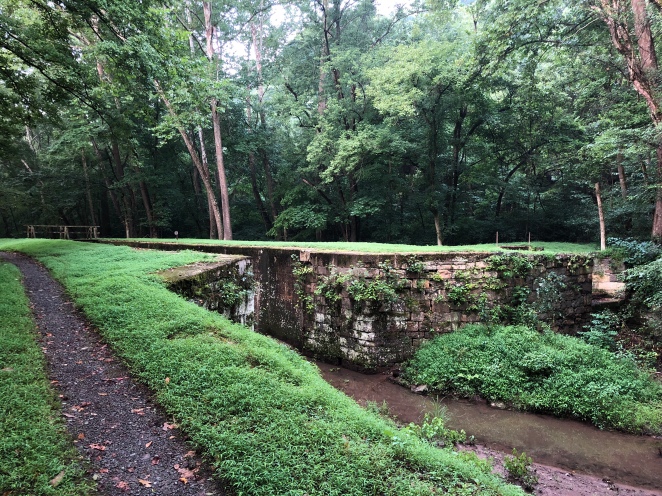 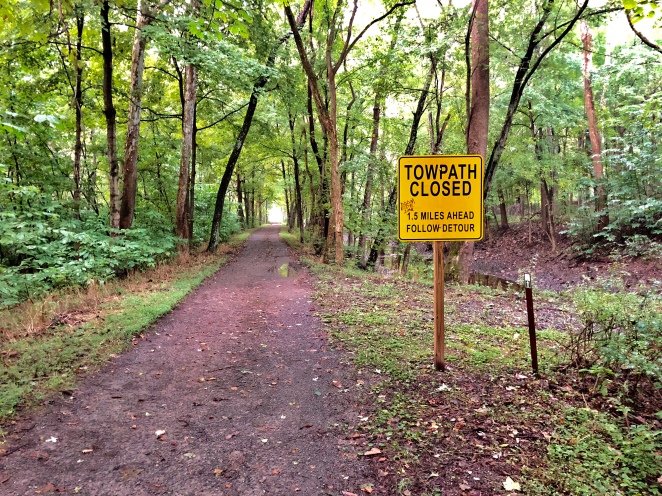 If you can think through gritted teeth, I did. “The bastards!” “They promised me!” “End of the month, they said!” But here it was: “TOWPATH CLOSED.”

My wallowing in self pity was momentarily interrupted by a fallen tree that blocked the Towpath. 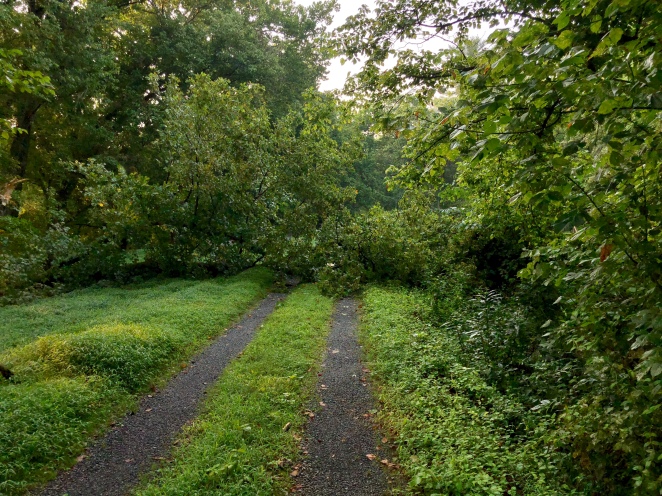 I was so furious I don’t even recall now how I got past it– I probably just kicked it out of the way.

What could I do but ride on? So I did. Ten minutes later I reached the sign I had been dreading. 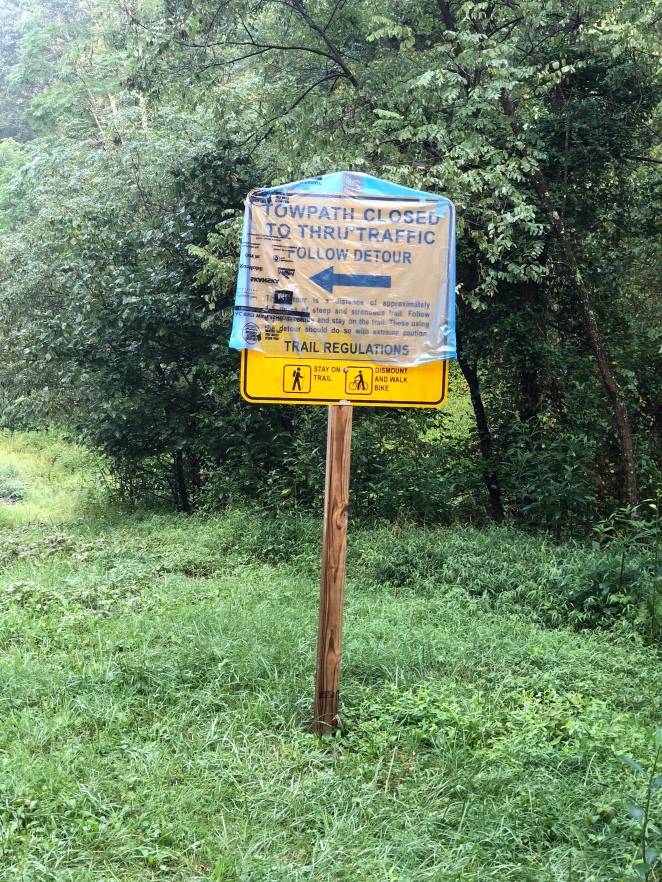 This one told me that I had to go up the trail over the top of the tunnel.

“Approximately 1.5 miles of steep and strenuous trail.” “DISMOUNT AND WALK BIKE,“ the sign warned. Yeah, right! Like I’m going to go riding my almost 400 pounds/180 kilograms of bike, panniers, gear, clothing, and me up a single track dirt path full of big rocks at about a 20% incline for any distance at all. Idiots.

But… the sign had a blue plastic bag pulled down over it. What did that mean? That if the Park Service says it, it doesn’t count if there’s a blue bag over the sign? There was no one to ask– I had no cell signal. And there was no gate or tape across the Towpath barring my way on towards the tunnel. What did I have to lose? So I continued on, making a rude but completely futile gesture towards the detour path as I passed it. 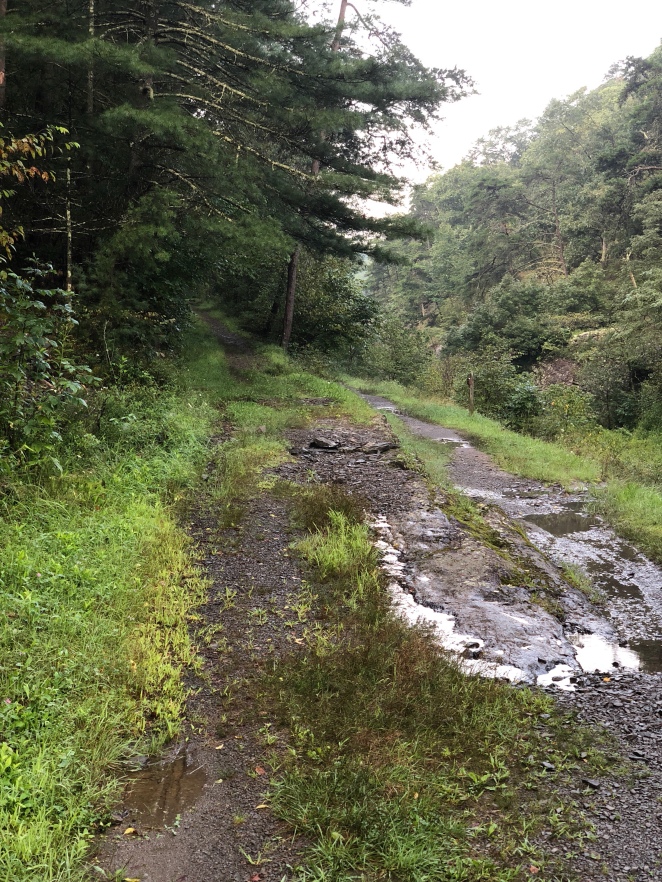 The Towpath quickly became much narrower and wilder in appearance. 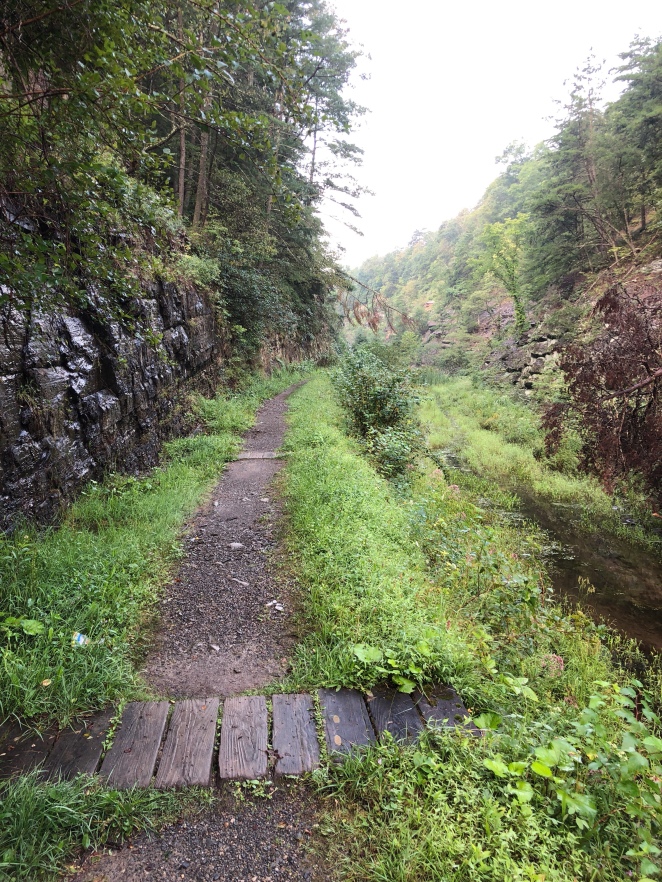 Shortly it was replaced altogether by a boardwalk. 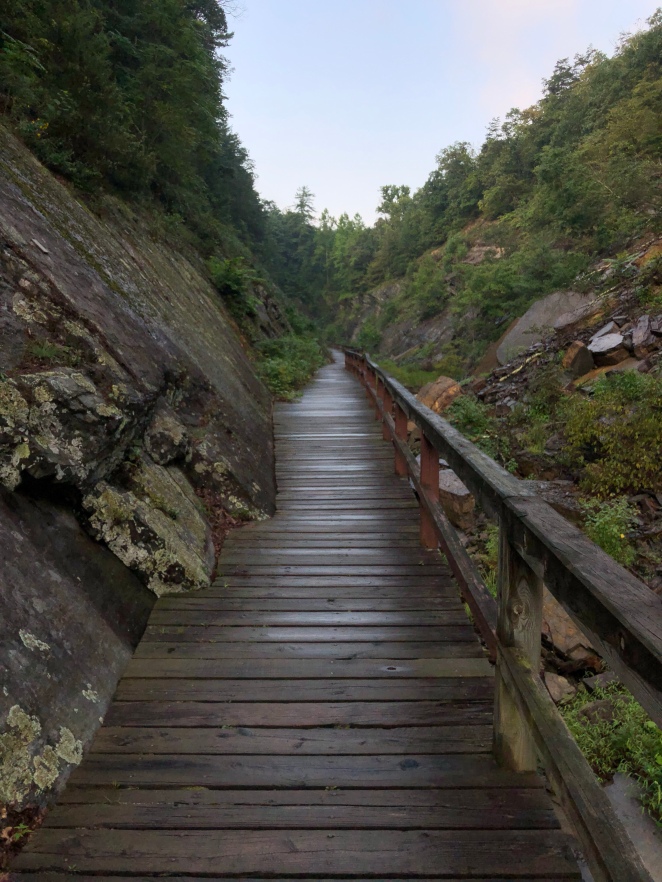 The cliff walls narrowed in on the sides of the Canal.

Looking at the cliff to my left as I approached the tunnel entrance it was immediately apparent what the problem was that was necessitating the work and the closure.

The rock overhanging the Towpath looked like the layers of an onion, except the layers were a foot or so/around 30 centimeters thick and many yards/meters long. If a section of one of the layers became detached from the remainder of the cliff underneath it and slid down it would bury the Towpath and anything that was on it under tons of rock. I moved along.

I came to a section where the “pinning” work had already been accomplished.

It looked for all the world like what the Park Service was doing was installing those concrete parking lot bumpers on bolts drilled into the rock to keep the layers from detaching and sliding down.

I’m sure that this is necessary work. I know that I’ve said things that were not very nice about the Park Service. I’m really glad that this work is being done, as it looks like there really is a substantial safety risk. I’ll just leave it at that I hope the work can be completed this year and that future closures will not be necessary for a long time to come.

Shortly, the downstream portal of Paw Paw Tunnel stood in front of me. 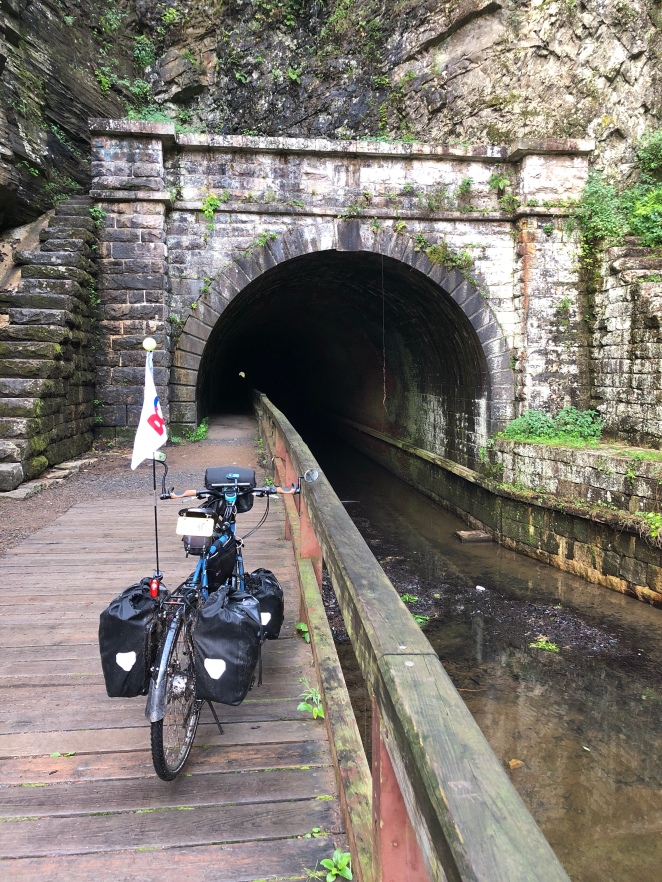 It may truly be the most marvelous artifact of 19th-century civil engineering on the Towpath.

The tunnel is just over 3000 feet/one kilometer long. The inside of it is lined with what must be millions of bricks. 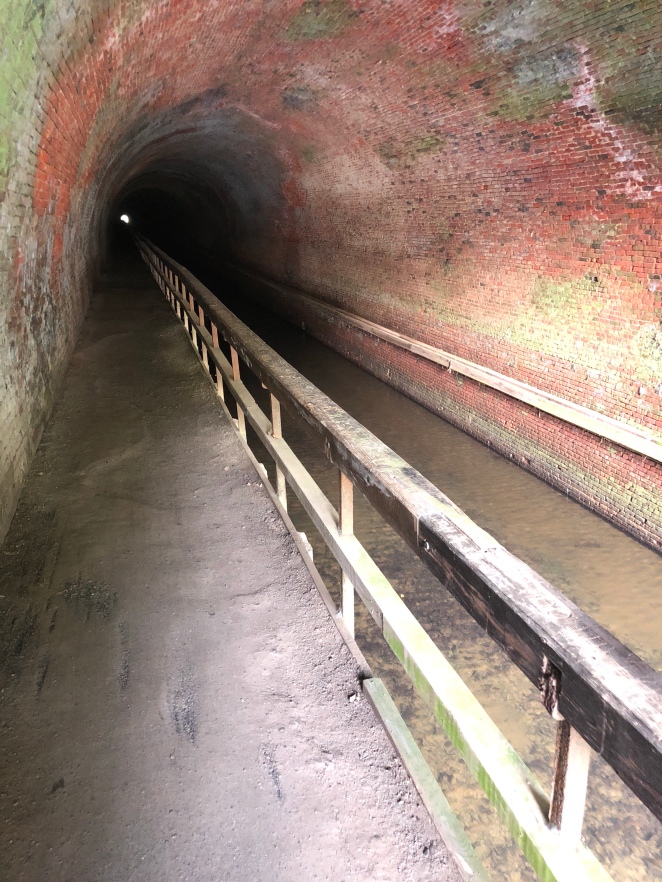 This lining, as best I could tell, was in remarkably good condition. As I walked through the tunnel on the very narrow ledge that carried the towpath to the other end, I marveled that it would be possible to somehow drive a mule onto this ledge, which would not have had a railing back then on its Canal-side edge, in almost pitch-dark conditions. 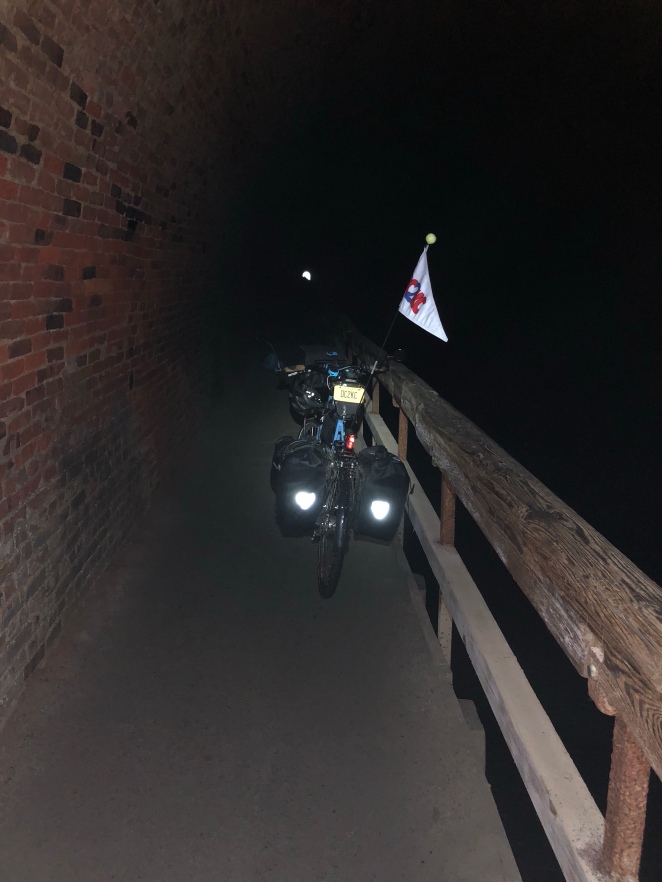 Sounds echoed strangely as well. Inconceivably cool. It is a privilege to see it.

All too soon I reached the other end of the tunnel.

From the upstream portal

it was less than half a mile/800 meters to where the road into Paw Paw, West Virginia crossed the Towpath on the bridge. In that distance I passed the end of the detour path that I did not have to take after all rejoining the Towpath over a sedate little plank bridge.

I left the towpath on the other side of the bridge

and took a bike path which ran alongside the highway. The bike path ended up at the highway bridge over the Potomac River, which I crossed,

entering the community of Paw Paw

and West Virginia at the same time.

I was told by a person walking along the road that the restaurant in town did not open for another couple of hours– it was still quite early due to my sunrise departure from the hiker/biker campground. So I wound up getting a serviceable fried egg breakfast at a gas station/convenience store at the main, and probably the only intersection in Paw Paw. Fed, I made my way back into Maryland and the Towpath, crossing the Potomac River for the final time of my trip. 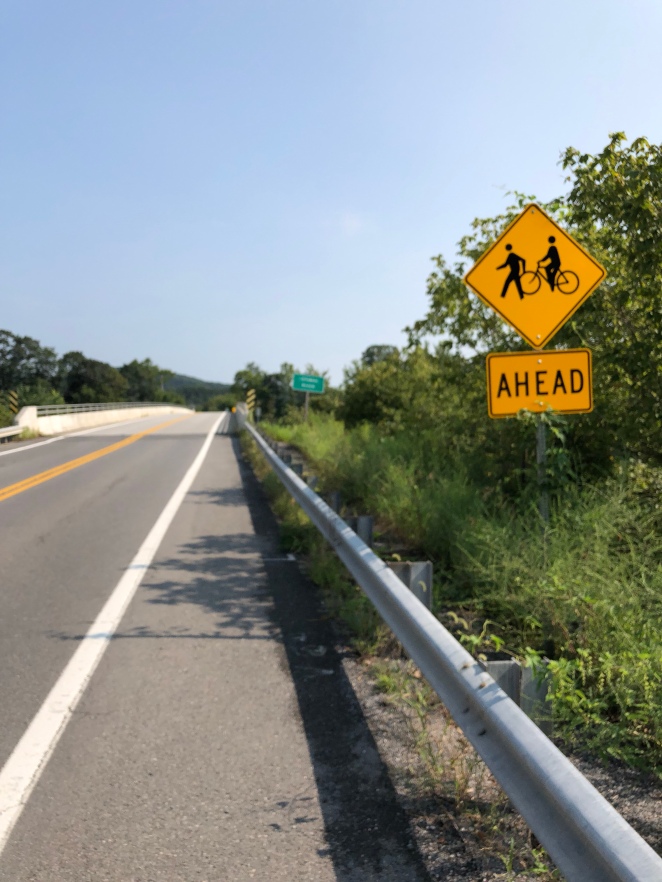 Over the past six days I had developed a much better appreciation for this most American of our nation’s rivers.

I won’t say the remainder of my ride down the towpath from this point was anti-climactic. In fact, beyond getting a picture of a turtle- they were numerous each day but even more camera-shy than the deer-

it did have a very noteworthy aspect– the worst mudholes of my entire ride thus far.

There were puddles stretching completely across the towpath that were easily 25 feet/almost 5 meters long.

The Canal, ever present over my right shoulder, was filled for miles/kilometers with bright green algae.

My bike was a muddy mess

and I was pretty much a soggy mess as well, as my cycling clothes never really dried out in the high humidity. I shudder to think about all the wet stuff crudely jammed back into my panniers. I decided to ride on past Evitts Creek Hiker/Biker Campground into Cumberland, Maryland

and find the least expensive place that I could spend the night that offered a shower, washing machine and a garden hose. I pedaled past Towpath milepost 184, the last full mile before the end,

and reached Cumberland by mid-afternoon. I rode past the very low-key signat the end of the Towpath, 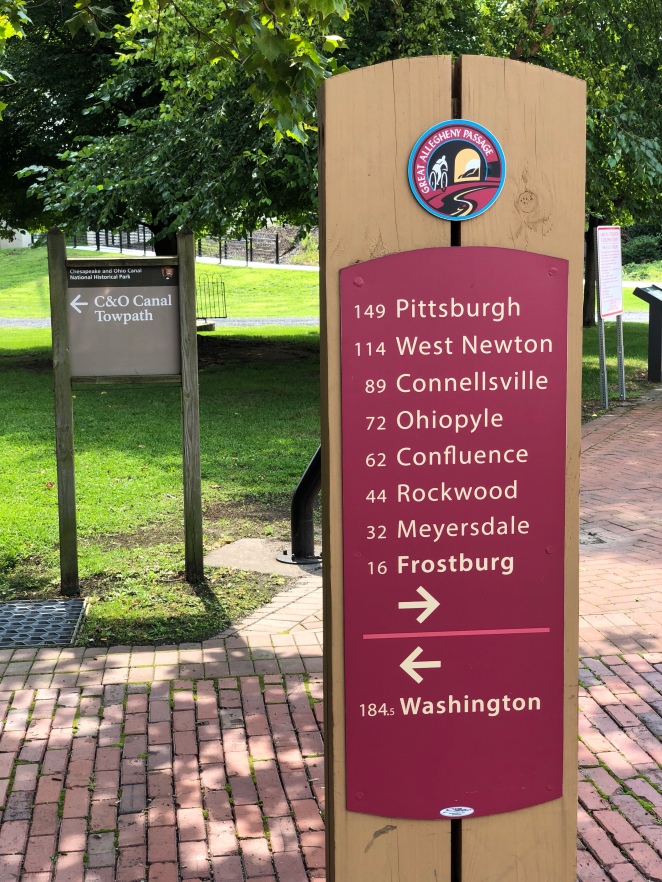 and then on via city streets to my lodgings for the night. 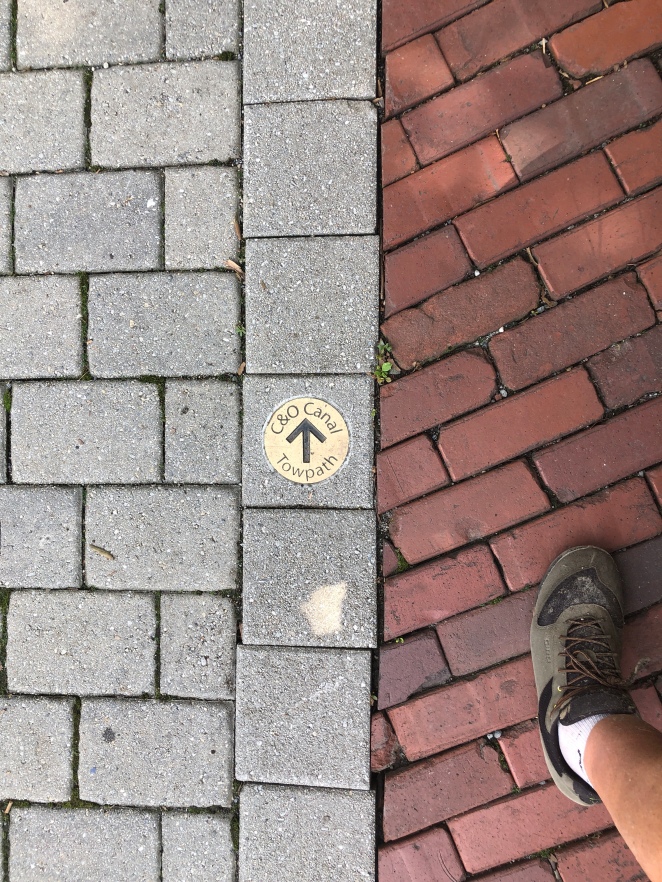