What would Ed Do?

“Cactus” Ed Abbey has been a personal hero of mine for as long as I can remember. “Desert Solitaire,” his masterpiece, has been published for 50 years this year. May it never go out of print.

Abbey was a pretty plain-spoken guy when it came to what he thought was right and what he thought was wrong. It’s easy to label him an anarchist in a direct line of descent from Walt “Resist much- Obey little” Whitman but that glosses over a lot. Abbey believed in actuality that there should be rules- lots of them, in fact. Those rules, though, were grounded in a whole different set of values. He was not a politically correct guy. He did not suffer fools gladly- in actuality he did not suffer them at all. He just did what he thought was right, and to hell with you if you didn’t see things his way.

So Ed Abbey tends to be who I look to when I’m confronted with a dilemma involving authority. Oh sure, I draw lines a lot sooner than he did- no monkeywrenching for me, for instance. He’d probably think I was a coward for stopping short of that and wouldn’t have hesitated to tell me what he thought to my face. But I like think we would have gotten past that based on our general agreement about so many other things.

I asked myself what Ed Abbey would have done if he’d pedaled a bicycle most of 1,000 miles/1,600 kilometers to experience something and found himself looking at this just before he got there.

Now, I can’t point to evidence in anything Abbey wrote that would support a conclusion that he ever rode a bicycle. I will note, though, that bicycles are one of the methods of locomotion he speaks of with approval in his rant about “Industrial Tourism” found in Desert Solitaire. So, finessing the point, what would Ed have done on finding these barriers thrown up without warning barring his way onto the bike path along the brand new Indiana State Route 265/Kentucky State Route 841 East End Bridge over the Ohio, presuming that riding across the bridge was one of the major reasons (admittedly among many other major reasons) he would have cycled such a long way to get there?

There was a twisty little piece of wire tying the barricades to the fences on the side of the path.

Presumably, someone who would untwist the wire is violating some law just by that act alone. But the barricades can’t be moved aside unless the wire is untwisted. I stood there and looked out onto the bridge.

Then Ed Abbey whispered in my ear

If the end does not justify the means – what can? 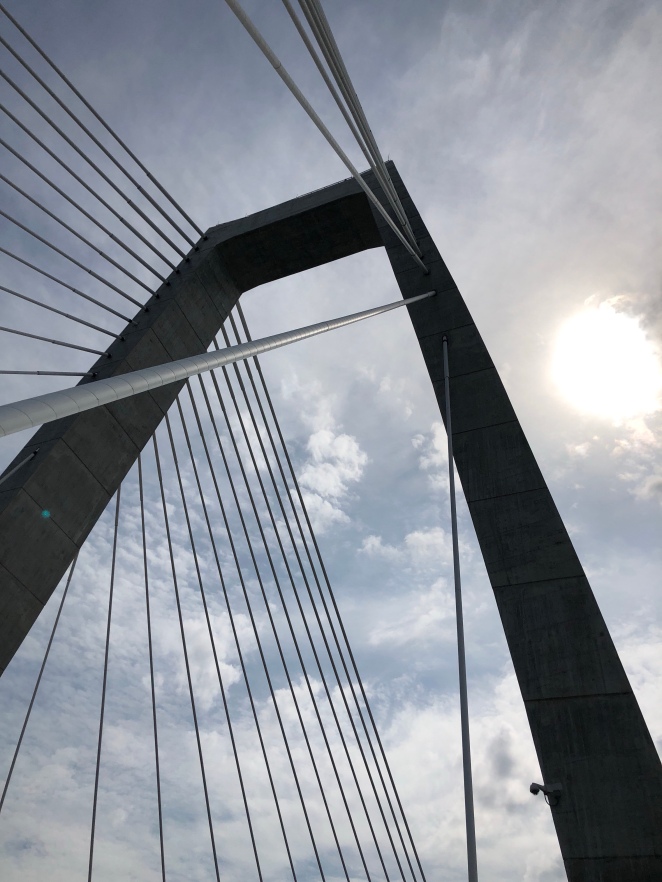 As it turned out, I found out why the bikeway on the bridge was closed- a crew of workers was using it to work on some cabling under the bridge deck.

The bikeway was closed during the week for a full month to allow the work to be completed. The workers were, I’ll admit, pretty stony-faced when I rode up to them and asked if I could slide my bike around their truck. I told them about my trip- I think they were on a lunch break. One of them looked at me and said, “Well, you’re here, aren’t you.” I admitted that I was. He said, “Just make sure you put the wire back at the far end.”

One thought on “What would Ed Do?”