“Those are indeed some odd scans…”

Well, I was warned.

I’ve been posting in the various Facebook bicycling groups of which I am a member ongoing information about the somewhat fairly pretty oh well, okay… extremely detailed planning I’ve done in getting ready for Side2Side. The day by day itineraries, the mile by mile route, the address of the nearest Golden Corral when I am in Omaha…

…those sorts of things. Many folks commented applauding my hard work. Others took issue with having most everything worked out in advance, noting that doing this, at least as far as they were concerned, took a lot of the sense of adventure out of the whole endeavor.

A few, though, asked me, sometimes in a pretty pointed way, what I was going to do when things fell apart. What good, they questioned, is a 103 day plan that has you in Canajoharie on day 99 when you wind up holed up somewhere in Nebraska for a week waiting out a string of tornados? Well, I’d respond, it’s always worked out for me before. I’ve made six long unsupported trips starting with my 82 day ride down the Atlantic Coast in 2016 and have always arrived at the end of the trip destination on the day I’d announced months in advance.

Now, that said, I build a weekly “rest/slack” day into the schedule. Side2Side has 16 of these (although one will be taken riding my unloaded bike the 20 mile/32 kilometer or so round-trip up to Niagara Falls from Tonawanda, New York). If maintenance, weather or some other situation puts me a day or two behind during a given week I just ride on a rest/slack day to make the time up. It has certainly happened, most recently on my Natchez Trace round-trip ride in 2018. I’m sure it will happen on Side2Side.

But what I’m dealing with now is completely off the charts. To get my bike from Alaska to the start of my transcontinental route in Seaside, Oregon I decided to have Backcountry Bike & Ski, my great local bike shop in Palmer, Alaska,

tear down and box my bike for pickup there by BikeFlights. BikeFlights would then have the bike shipped directly to the Prom Bike Shop in Seaside for reassembly and check out, and I would pick my beloved Disc Trucker up there on Saturday of this week and start Side2Side the next morning.

Now, I’ve used BikeFlights several times over the past four years and have never had an issue. My bike has always shown up where I needed it to, on time, and in perfect condition. Since Side2Side, though, has so many moving parts, so to speak, I decided out of an abundance of caution to set up the shipment a few days earlier than I absolutely needed to in order to give both bike shops plenty of time to get everything completely in order. I felt that this was particularly important at the Seaside end, as I was going to get on the bike from there and ride it 5,000 miles/8,000 kilometers or so. I wanted the mechanic at the Prom Bike Shop not to feel rushed when she or he gave my Surly that good look over.

The first indication of trouble was a message from the Prom’s owner, who had thoughtfully checked on the tracking schedule to confirm the planned arrival of the bike on Wednesday. I was in the air yesterday between Edmonton, Alberta and Portland, Oregon yesterday when she messaged me and let me know my bike was in…

Yes, that Illinois. You know, that big arrowhead shape suburb of Chicago that they set Wisconsin on top of. Know it well, myself. I grew up there. The Side2Side route crosses it, starting on day 70. Not yet, in any event.

Not only that, but my Disc Trucker had also paid visits to California, Kentucky and Indiana. There was only only one conclusion I could reach. 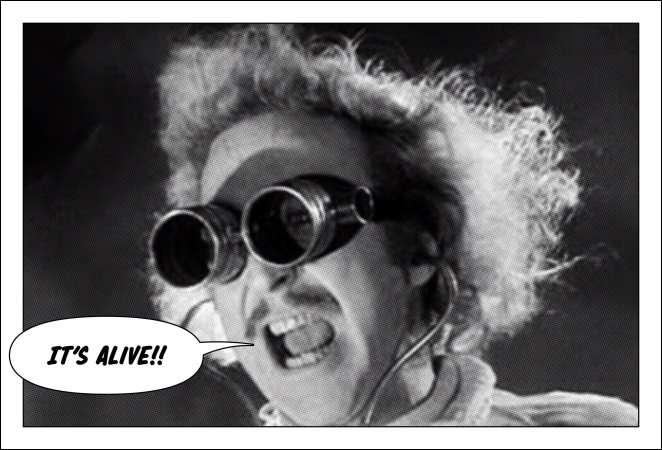 Well, either that or, after I calmed down a bit and thought about it, that someone had really, really screwed up. So I wrote BikeFlights customer service and, showing remarkable restraint by both choosing appropriate polite language and in not capitalizing entire sentences followed by three or four exclamation points or question marks, err… voiced my concern. I received the following response. 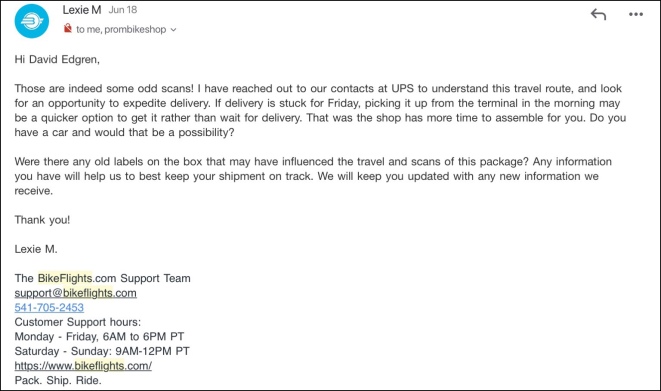 I am not amused. Having not seen the bike since I dropped it at Backcountry I have no idea about the box. The folks there are pros and have have done this, for me even, many times before. My guess is that the box my bike is in looks like, like… like a bike box. Yeah, that’s it. A bike box! With a bike in it!

I’d send this to Lexie, but somehow I don’t think it would help.

So, as of this morning, there’s no new scan. No indication my bike is in, say, Arkansas. I did hear from Bikeflights. “Kent,” who I assume had the customer service shift after Lexie’s, reassuringly let me know that, “The package is believed to be in a loaded and locked trailer currently on the road and there is no physical capability of stopping and intercepting the package at this time.”

Well, gotta believe in something, I guess. Right now, because I’m at heart an optimist, I’m going to believe it will all work out. I don’t know what else to do.

3 thoughts on ““Those are indeed some odd scans…””