The entire route on Ride with GPS [link].

I’ll then continue eastwards along the south bank of the river, leaving the Columbia where it makes its big turn north into Washington; heading east from that point to Walla Walla, Washington. From there I’ll have a long stretch on US Highway 12 and a few minor roads that parallel that highway for various distances, riding into Idaho through the twin cities of Clarkston, Washington and Lewiston, Idaho, and then continuing on US 12 along the Clearwater and Lochsa Rivers through the Rocky Mountains up to the summit of Lolo Pass and the Montana border.

I’ll drop down from the pass to Missoula, Montana, then head south from that city along the Bitterroot rail-trail towards Lost Trail and Chief Joseph Passes, then turn east and ride through Wisdom, Montana over to Interstate 15, which I’ll follow- sometimes on the freeway, sometimes on frontage roads- through Butte, Montana and up to Boulder, Montana, where I’ll turn back in a southerly direction and drop down and over to the headwaters of the Missouri River at Three Forks, Montana. I consider up to here as being Stage One of the ride.

From the headwaters area, I’ll ride the entire length of the Missouri River, staying as close to it as roads that are reasonable for heavily loaded bicycles will allow, all the way to its mouth on the Mississippi River just north of St. Louis, Missouri. Along the way I will pass through Montana’s state capital Helena and then Great Falls, Montana.

In Montana east of Great Falls I will transit the rugged Missouri Breaks, now a National Park, and then ride many miles on the “High Line:” US Route 2 across the northern part of the state.

I’ll pass the gigantic Fort Peck dam, the first of the many great dams that impound the Missouri as it passes through the northern Great Plains. On finally leaving Montana I’ll enter North Dakota just before riding through Williston and then make the big right-hand turn south along with the river into the central part of the state.

My friend Deano Thiele will join me there somewhere near the state capital city of Bismarck, North Dakota and the two of us will continue in a southerly direction along the Missouri into South Dakota. The route will take us from north to south through the middle of that state as well. 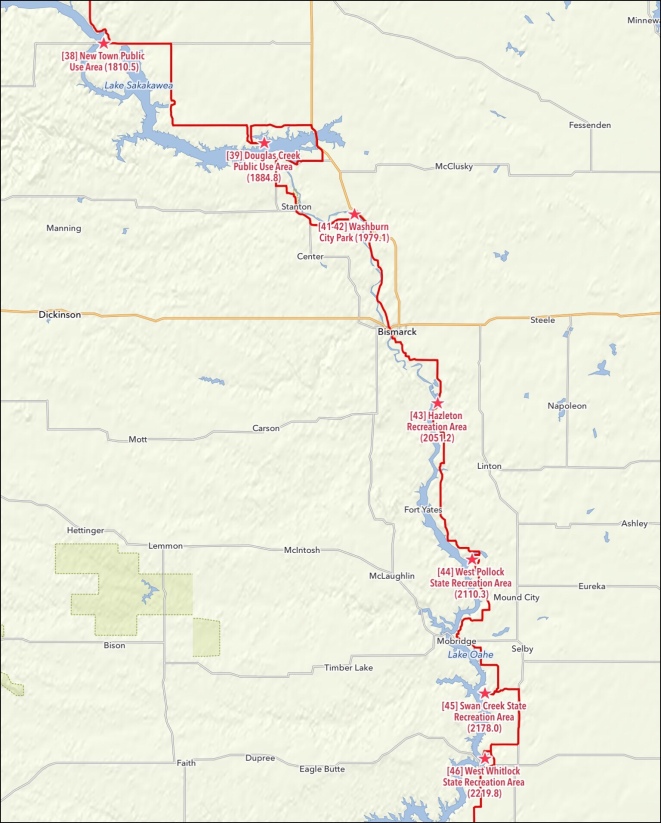 We’ll ride through Pierre, South Dakota’s state capital, and continue south until we are just across the state’s border with Nebraska, then bear east again, following the Missouri.

Along this stretch we’ll ride briefly on the Nebraska side of the river, returning for a final few miles in South Dakota. We’ll enter Iowa at Sioux City, then continue south through flat bottomlands along the Missouri River in that state. A day’s ride south of Sioux City we’ll cross the river into Nebraska for the second time and ride through downtown Omaha. Crossing back into Iowa just south of that city we’ll diverge from the river for a day or so to ride the length of Iowa’s Wabash Trace rail-trail, which ends at the border with the state of Missouri. We’ll continue due south and pick the river back up north of St. Joseph, Missouri. 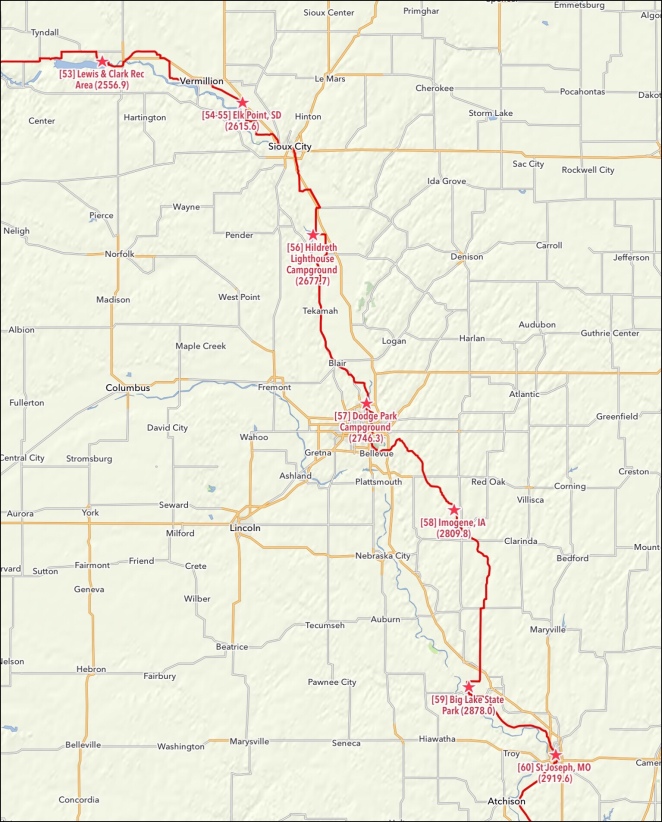 From St. Joseph Deano and I will ride alongside the Missouri Rive on its namesake state’s side into the Kansas City metro area. We’ll cross the river there and ride through Kansas for about an hour, our shortest mileage in any state of the trip. Leaving Kansas City, we’ll follow the Missouri River in a generally easterly direction towards the center of the state, where we will pick up the KATY Trail rail-trail just north of Boonville, Missouri. We’ll then follow the KATY Trail east towards the St. Louis, Missouri Area.

The KATY will take us to within a few miles of the rest of the way across Missouri, ending at the “don’t blink” town of Machens, where we’ll then make a quick jog over to the point where the Missouri River flows into the Mississippi River. Deano and I will then backtrack a short distance to cross the “Big Muddy” at Alton, Illinois, from where we’ll ride the few miles to Wood River, Illinois, where we plan to stay a day with Dave Duncan, a friend who biked the KATY Trail with me last year. This will complete Stage Two of the ride.

Leaving Wood River we’ll head back west through Alton along the Mississippi River until we pass the mouth of the Illinois River. We’ll cross the Illinois by the Brussels Ferry to its west side then follow it closely from that point all the way into the huge Chicago, Illinois metropolitan area, passing along the way through Peoria, Illinois and riding most all of the length of the Illinois & Michigan Canal towpath state trail. 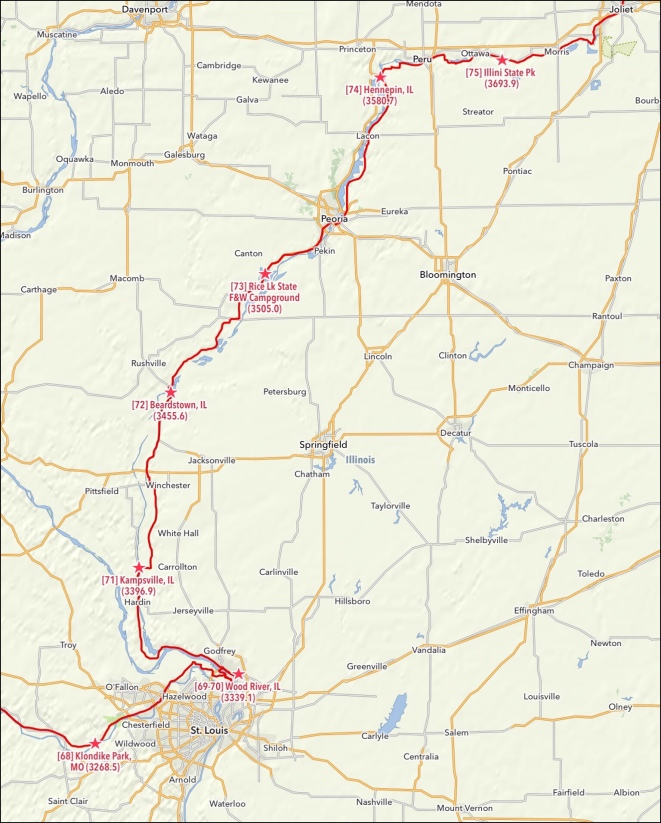 I’ll stop to visit friends in my hometown of Naperville, Illinois, a western suburb of the city, then we’ll ride a short distance west over to Aurora, Illinois and the western end of the Illinois Prairie Path rail-trail, which we’ll follow through the western suburbs towards Chicago’s downtown. Deano and I will head on into the city, riding around Chicago’s Loop and then south into Indiana, with all but the last few miles being along the system of bike paths on the Lake Michigan shore. We’ll then pick up and follow rail-trails through northern Indiana into the state of Michigan, skirting the Indiana Dunes National Park. In Michigan we’ll continue up the eastern shore of the lake, picking up the Kal Haven rail-trail just north of Grand Haven, Michigan. That will take us east to Kalamazoo, Michigan, then Deano and I will follow local roads through Battle Creek, Michigan and then southeasterly across that state towards Toledo, Ohio.

Once past Toledo we’ll pick up a rail-trail that will take us through Oberlin, where we’ll turn and head north to the south shore of Lake Erie. We’ll turn back to the east there and enter the Cleveland, Ohio metropolitan area, transit downtown Cleveland, then continue through lakeshore eastern suburbs of that city towards the state of Pennsylvania. 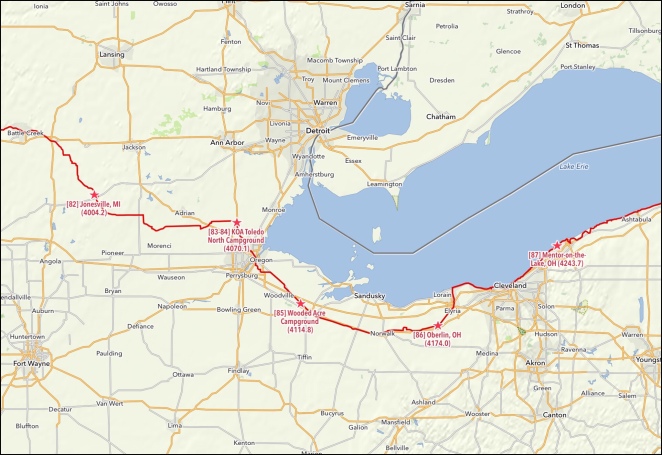 Reaching Pennsylvania, we will ride through the city of Erie. A few miles further along Deano and I will ride into New York state, where we’ll continue along the Lake Erie shore into Buffalo and then Tonawanda. This will complete Stage Three of the ride.

In Tonawanda, we’ll take a rest day and make a quick round trip west over to the nearby city of Niagara Falls, New York unburdened by panniers and gear. The next day we’ll start eastward on New York state’s Erie Canal Trail: the ECT.

We’ll ride the ECT all but across the state through Rochester, Syracuse, Utica and Schenectady to its eastern end in Albany, New York on the Hudson River. Deano will leave Side2Side there to visit family. From there it’s just a couple of days ride for me down the Hudson River to New York City.

I’ll ride first on the east side of the river, crossing the Hudson on the ped-bridge at Poughkeepsie, New York and continuing down the west bank. A highlight of this stretch will be riding from north to south through the United States Military Academy at West Point. Just past Nyack, New York I’ll enter the 17th and last state of the ride: New Jersey. Through most of the Garden State I’ll ride along the Hudson River Palisades. On reaching the George Washington Bridge I will recross the Hudson River a final time back into New York, where I’ll enter New York City and take a victory lap around Central Park. I’ll finish up by riding through lower Manhattan and taking the Brooklyn Bridge over the East River into Brooklyn, New York. Side2Side will end on the 3rd of October in Seaside, New York, a suburb of the city out on the Atlantic shore in the Rockaways. This will be Stage Four of the trip. 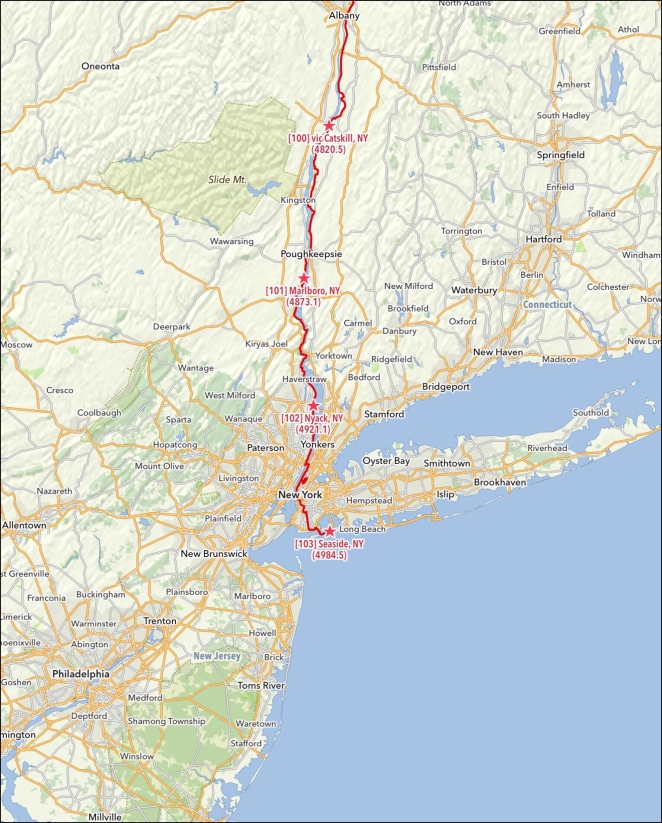 12 thoughts on “The Side2Side Route, explained”