I’ve mentioned that, south of New York City, my trip plan calls for me to put in 60 mile/100 kilometer days.  Every day.  For a month.

Now, this is basically possible because, between there and Key West, the terrain can pretty much be summed up in two words: parking lot.  During the trip to date hills have slowed me down, sometimes a lot.  On stretches like rail-trails where there is no appreciable elevation change or, at worst, almost imperceptible grades I am currently riding at around 14-15 miles/~25 kilometers an hour, and I can apparently sustain that speed for a long time.

So I was pleased today on a somewhat hilly route to find that I had made it 58.5 miles/about 95 kilometers. 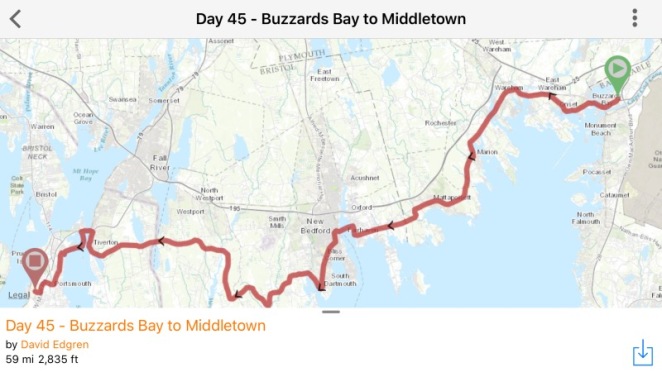 I can do this!

I did run into my first major routing glitch.

A three year bridge replacement project according to a nice guy who stopped and asked if I was lost when he spotted me staring forlornly at the construction barriers.  The bridge still shows up as open on both Google and Apple maps.  Oopsie.

Weigh-in day tomorrow.  The suspense is killing me.