I’d be seriously remiss if I departed Halifax on my trip without mentioning Bikes by Dave [linkie], a local bike shop that I stopped at on Monday to get the Surly checked over and to ask a couple of questions that I had.

When I called to set up a time to come in I was told that there was a several day wait for service but after I explained a little about my trip I was told to come on over, as they were always happy to make a little room on the schedule for someone on a long-distance tour.

When I arrived, Tom, the shop’s mechanic, quickly and efficiently went over the bike, addressed my questions and concerns, and made several helpful recommendations concerning my route down Nova Scotia’s southwest coast. It was obvious during the 30 minutes or so that I was there that, if anything, the info about being busy was an understatement. It was a busy shop, that’s for sure.

When the bike was ready Dave Marder, the owner, rang up what I thought was a very reasonable amount for the time Tom spent.  If I lived in Halifax, I know where I’d take my bike to get worked on.

From box to bike

in only six hours.  Heh, just noticed the seat’s way too low.

Tomorrow I’ll go for a shakedown ride around Halifax without loading it up.  It looks like there’s some interesting things to see here. 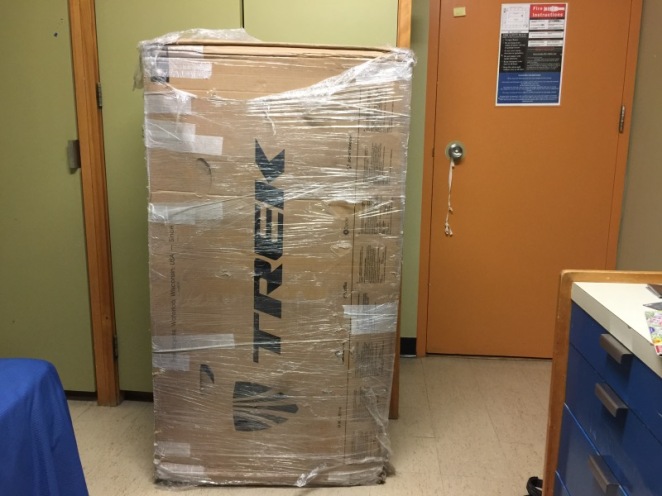 I’m, as you have probably guessed, in Halifax, Nova Scotia.  Nobody told me it would take an hour and a half to get to where I’m staying from the airport, or that I’d have to change buses three times, or that my checked baggage- the two rear panniers- would have not shown up on the carousel.

But none of that matters right now.  I’m here.  The bike is here.  And all the rest will work out.

I’m exhausted.  Time for bed- catch you in the morning.  We have a bike to put back together.

Today really didn’t go as planned.  The Topeak cadence/speed sensor we were waiting on didn’t exactly work with my bike.   I’ll be getting in touch with the company, because a phone call to them from owner Garf Cooper at the ZenCog bike shop indicated that I might have gotten an older unit. Shame on someone. 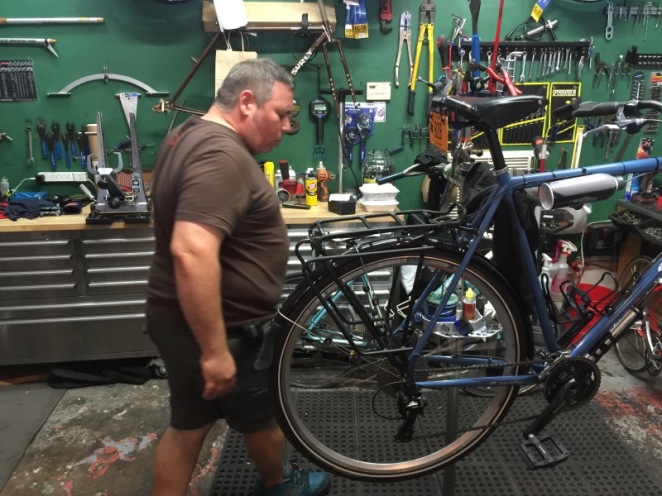 So I spent much of the afternoon hanging around ZenCog  instead of getting going. My schedule is set up to accommodate things like this happening, but it’s sort of disappointing to blow the first day of the ride.   Garf and his crew are great folks to hang around with though, and I’d highly recommend ZenCog to anyone who has need of a bicycle shop in Jacksonville, Florida.  It’s a real bike shop and I could tell over the several days I hung around there that Garf does right by his customers.

Here then is what I’m  doing tomorrow.  I’ll be up early to sort out the last packing of the panniers and loading of the bike.  Sometime around nine I’ll head out and ride west through the environs of Jacksonville, pass under the I-295 beltway,  and then pick up the Jacksonville – Baldwin rail trail.   Past Baldwin, the trail ends and I’ll pick up US 90, the old two-lane main route west that was replaced by Interstate 10.  I plan to stop for the day in Macclenny after cycling a bit more than 30 miles/50 km  and stay for the night at an inexpensive motel at the freeway interchange south of town. That will give me a good chance to check over and adjust as needed my gear and the bike before I set out on a longer riding day on Wednesday.

As you can see, these miles are as flat is the proverbial parking lot.  They should go by pretty quickly, but I’m still a little nervous about the impact of four fully loaded panniers.   We’ll see.

I’m estimating four hours riding time making seven and a half miles an hour with a 15 minute break each hour.  That should hopefully put me in Macclenny before the day really heats up. 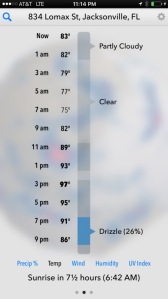 This first week of the trip will get me by next weekend to Spring Hill, Florida where my sister Sue and her family live.

I’ll visit with them ’til early next week then head off for Key West.  Back with you tomorrow.

Here’s to Aero Tech Designs and Scosche, companies that were incredibly responsive when I found myself missing items at the last minute in Alaska to pack for the flight to Florida and the start of the trip.

I ordered all my biking clothes from Aero Tech.  The company has sizes for guys like me- 3X and 4X tall.  When we opened the package the clothes came in early last week Heather and I thought we had been shorted a pair of shorts (funny that, eh?) so I called the company’s customer service folks and asked if the order could be made whole.  I explained I was leaving on Friday and doubted that anything would make it to Alaska before I left.  I asked that the replacement be sent to the ZenCog Bike Shop hoping it would arrive by today.  Well, it was there Saturday when I arrived.

The best (or worst, depending on your perspective) part.  In our last mad pass through the house looking for the tiny charging base for the Scosche heartbeat per minute sensor armband, we found the missing shorts still wrapped under the end of the bed among the dust bunnies.  I’m gonna call Aero Tech customer service back today and pay for the shorts and the company’s shipping cost.  Sheesh.

The Scosche charging base situation was clearly my fault from the get go.   The thing is tiny – not much larger than a quarter with some rectangular extensions on the sides.  I charged the sensor when it arrived so that I could check it out and thought I had put the base among the things to be packed. Hah!  Fail!   We kept thinking we’d find it, so put off calling Scosche for a replacement.    After a while I just forgot about it until I started the frenzied packing two days before I was supposed to leave. I called Scosche customer service on Thursday,  explained that I was flying out mid-day Friday and asked if there was any way that a new charging unit could be sent by the end of the week so as to hopefully arrive in Jacksonville today.  Like the cycling shorts from Aero Tech, The charging base arrived on Saturday. The FedEx guy actually walked into the store about 10 minutes after I arrived.

I can’t say good enough things about these companies. I am so glad to be dealing with them in connection with my trip.

I needed some stuff…

…thanks, George, for making me smile when I wrote that…

…so I rode to my local Target store, which is about seven and a half miles away.

I’m sitting in the store’s Starbuck’s now, replacing lost electrolytes by drinking a large coffee Frappucino.  I beat Google’s predicted time down here, and even stopped to take some pictures.

I am going to need some soothing butt cream, that’s for sure.

But I’m alive and I feel GOOD.

I’m doing something audacious.  Thanks for coming along on the ride. 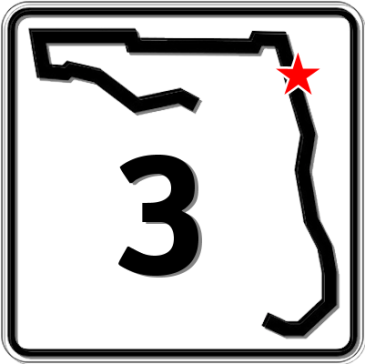 Just as busy today as yesterday.  I’ll blog on the plane. 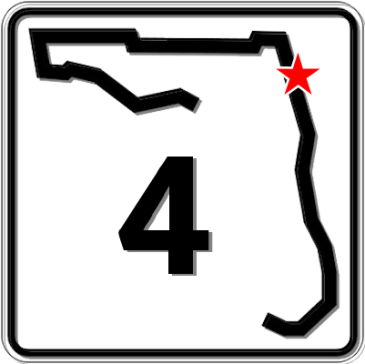 Plane leaves Anchorage at 1:25 p.m. Alaska Time tomorrow.  I have not stopped moving today to sit down at the computer until now just before bed, and I’ll be back up at five.  Lots of news- thanks for your patience. 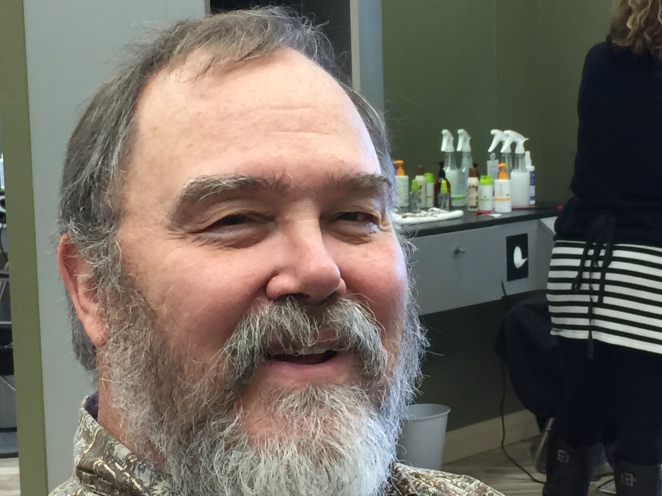 It’s been a pretty tough day.

You’ll recall from yesterday that today was the second day of my cardio stress test.  The treadmill day.  I was a little apprehensive, as I really do not like the device, and stay as far away from them at the Alaska Club (the fitness gym Heather and I belong to) as I can. 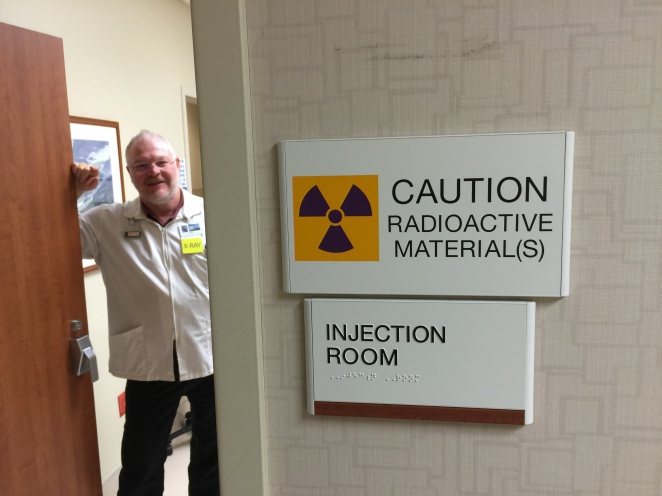 Rich, the nuclear med tech, started out the day as yesterday, with a gamma ray emitter injection.  A short wait then it was off to the treadmill.

The object of this day of a cardio stress test, in case you’ve never had one, is to crank your heart rate, measured in beats per minute (BPM), most of the way up to the max exertion you are supposed to be able to tolerate, then watch EKG readings for any abnormalities.  The max BPM is calculated according to as follows:

Exercise Intensity- How to measure it – Mayo Clinic [linkie]

Now, a doctor will tell you that this formula is just a guide.  For a young athlete it may be adjusted upwards.  For an old geezer like me, it will almost certainly be lower.  Per the formula, though, my max BPM is 220-63 (my age, unfortunately), which is 157.  So the test was likely shooting for a BPM of 130-135 or so to take measurements at.

The short story is that I made it to 130 or so and was doing great.  My EKG waves started and had stayed picture perfect.

My GP doc, Natalie Beyeler, was there, encouraging me along.  When they cranked up the treadmill to the next level, though- steep grade and I was almost running at this point- my BPM went to 135 and then my oxygen saturation levels suddenly crashed, sending the heart readings haywire.  The O-sat level hit 85 and Dr. Beyeler stopped the test, although I was able to continue to walk all the way through about a two minute “cool-down” phase at a slow speed and on a level grade.

The bottom line is that, while my heart appears to be doing great, my lungs just aren’t (right now at least) doing their bit.  I will probably do just fine on the flat or up mild inclines on the road, but it is clear that my ability to climb real hills and then mountains is in question at this point.

So my doc has scheduled a few more tests next week.  On Wednesday, the 12th, I’ll have a pulse-oximetry test, an echocardiogram, and a pulmonary function test scheduled one after the other.  On Friday we’ll have the results and Doctor Beyeler and I will confer further.  We’ve known all along I’ve had asthma in the background and my O-sat level usually sits around 93 or 94, which is a tad lower than it should be at my age.  I’ve never smoked, worked in a coal mine, played with asbestos, or done other stuff knowingly that would damage my lungs.  I did have severe childhood asthma, though, and have carried around a rescue inhaler (which expire before they are ever used) for years.

So I won’t go into options or courses of action at this point, I’m pretty raw still over this happening, and it is no time to make significant decisions, especially since I’ll have much more information by the end of next week.  I did go out tonight and bought, at Wal-Mart of all places, a middling good oximeter- the device that they clip on your finger at the start of a doctor’s appointment- to measure O-sats during rides and workouts. 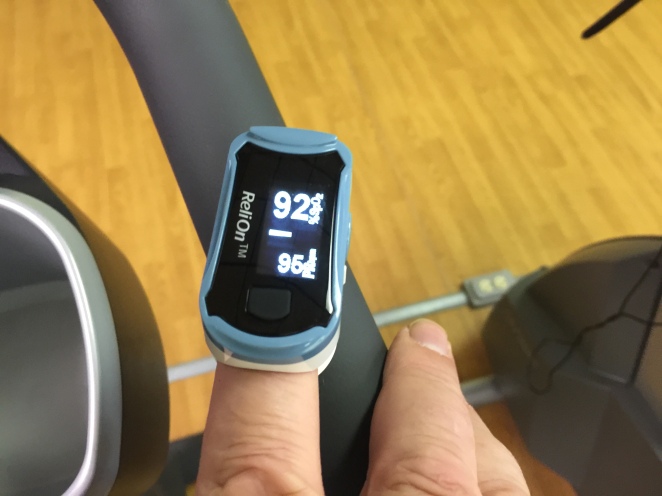 The device, which measures continuously, was just a little less than $36.  Over the course of a 45 minute ride on the exercise bike at moderate resistance at a ten mile/16 kilometer per hour speed, it never went below 92 and hit 95 a couple of times right before the end of the workout.  I was more focused on breathing deeply than I had been, but this just confirms my sense that the long almost flat weeks of The Long Warm-Up section of my planned route (The Atlantic Coast to Little Rock, Arkansas) is my friend.